Alcohol use among youth can be very harmful because their bodies and brains are still growing and maturing. Teenage brains are especially vulnerable to the effects of alcohol because the brain continues to develop throughout the teenage years and into early adulthood. 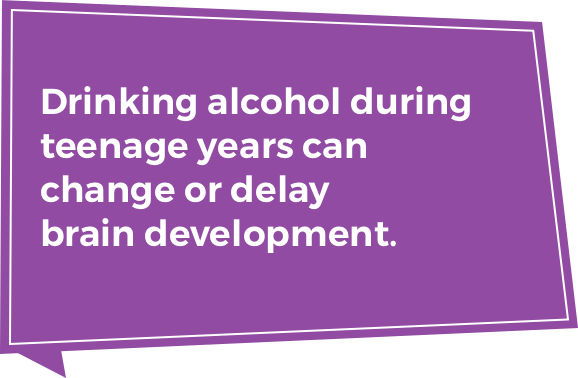 When teens make decisions or solve problems, their brains work differently than adults. Teenage behaviours are more often guided by emotions than thinking and logic. The frontal lobe, which is responsible for decision-making, impulse control and judgement, is the last part of the brain to develop. Research shows that drinking alcohol during teenage years can seriously change or delay these developments in the brain.

Unfortunately, research also shows that young people do not drink alcohol in moderation on a regular basis. Instead they switch between periods of no drinking and binge drinking. For youth, drinking alcohol is linked to increased risk of accidents, drowning, homicide, suicide and experiencing or committing assault. This is because alcohol affects judgment, reasoning and the ability to see the level of danger

During adolescence, youth are more likely to:

Also, youth are less likely to:

These differences in brain development do not mean that youth cannot make good decisions or that they should not be held responsible for their actions. However, when youth drink alcohol during a time when their decision-making skills are still developing, it can have harmful effects on their overall health and safety.